Delia srl was established in 1992 and has specialized in the production and planning of manipulators and robots for machinery for moulding rubber items.

The company has been operating for a number of years in cooperation with manufacturers and users of machinery for rubber material and has done much to update the working cycles and performance of the machines.

Delia has developed a series of special equipment and manipulators and moulds for all rubber items or rubber with metal inserts for the automotive industry, household appliances (white industry), medical, zootechnical industries and sports equipment. 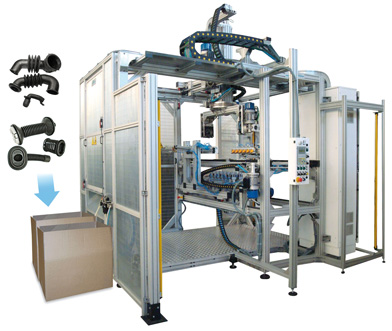 Delia Srl’s innovating robotic cells have been engineered to improve the quality of rubber moulded products and the productivity of the machines to produce them. Thanks to DELIA new work cells, which can be combined with anthropomorphic and Cartesian robots, it is possible to perform the following operations:

– multiple extraction of moulded rubber pieces with metal or plastic inserts and their de-burring on-board machine;

– loading of any metal, plastic or rubber inserts into the mould;

– orienting and stacking the rubber moulded pieces inside purpose-built boxes ready for shipping.

Other outstanding products of the company are:

• Robotized cells for the production of items for the automotive sector like bellows – the system draws and trims the bellows and fits up the injection peduncles by means of precise, fully automatic electrical and pneumatic movements);

• Double thermoregulated blocks allowing moulding simultaneously by two moulds placed on both the sides of the block;

Double thermoregulated block is used to inject into several points in the mould; it consists in a steel block where are placed injection runners, which are maintained at a safety temperature of 60-90 C°, thanks to the crossing of a thermoregulated fluid in a special circuit placed in the platen. The device is equipped by a set of regulators to check the amount injected by every nozzle. Injection nozzles are self-adaptable in height, as to fit better in the moulds. The special nozzles conformation allows to make up for possible skews of injection holes. The device, besides to inject into several points of the same plate, allows to inject in two work plate at the same time, too.

The robotized cell for the production of parts for the automotive industry integrates the various production phases from moulding to the finished product. It is used for automatically drawing, trimming and fitting up the injection peduncles. Bellows are moulded by a rubber injection press equipped with a DELIA thermo-regulated block, which allows saving material, a 12-openings mould with a double males series to carry out the removal and finishing in masked time, so remarkably reducing the cycle time.

The Bellows are moulded by a rubber injection press equipped with a DELIA 12-nozzles injection points thermo-regulated block, which allows saving material, a 12-openings mould with a double males series to carry out the removal and finishing in masked time, so remarkably reducing the cycle time.

The cell translates the male holder bars alternatively outside the injection press through both electrical and pneumatic movements. While the injection press is moulded a new series of parts outside a 12-positions cutting group cuts the small injection peduncles from the bellow collar, In the meantime, a trimming head removes the residual burr on the piece perimeter. At the end of the cutting and trimming operations the male holder bar with the moulded pieces is drawn by means of electrically controlled axes and placed in the drawing head area, which removes simultaneously rows of six pieces each by means of special taking groups.

After drawing the pieces, the male holder bar is turned and placed again on the electrical translation device from and to the press.

The global cycle time will be defined by the press according to the injection, vulcanization and frame exchange time.