Amut lines are widely known for their high-speed production of perfect shape rolls without any difference whether it is handy, machine or jumbo roll

Amut lines are widely known for their high-speed production of perfect shape rolls without any difference whether it is handy, machine or jumbo roll, all thanks to the fastest winder available on the market ProWind.

The unique solution of winding on idle roll shafts by contact only, allows Amut customers to achieve line capacity (on 2000 mm wide solution f.ex.) while running productions of films 12-17 micron to be in the range of 800 to 900 ton/month.

The same winding concept also allows the use of extremely lightweight cardboard cores without the need for special pneumatic shafts. 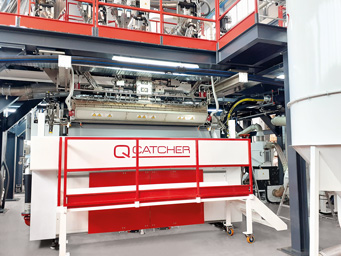 Polymer extrusion on Amut’s cast film line is done by Amut-designed single-screw extruders and the L/D ratio used is 40:1.

The extruders, developed for low power consumption, are able to achieve higher r.p.m., and high homogenization/output.

All extruder drives are water-cooled.

The in-line film quality control performed by the Q Catcher unit produced by Amut is one of the most important solutions developed lately on cast film lines. Q Catcher detects the exact position of the frost line on the chill roll during the production of stretch film.

The position of the frost line is read across the width of the film and displayed on the line PLC together with the actual thickness of the film produced.

The Q Catcher system is part of the main line algorithm that allows fully automatic repetition of all other production parameters for each saved film type/formulation.

The complete repeatability (during the production process) of every single type/formulation of film, in a completely automatic way and without the need of any intervention by the operator, contributes to reduce drastically the waste while obtaining the physical parameters of the film as previously saved.

Considering line speed/capacity and having an extremely fast roll change cycle on the Pro Wind winder, the need to fully automate the production process, especially for hand roll production, led to the latest version of the RollPack packaging system.

In its latest version with anthropomorphic arm, the Roll Pack packaging system produced by Amut is able to follow the production of any type of roll at the highest winding speed and is particularly efficient in the production of extremely short handy rolls which, after being packed in cardboard boxes, are placed on the pallet.

Being produced by Amut, the Roll Pack is also integrated in the main algorithm of the line, so by recalling the job previously saved, even the parameters of the packaging system are repeated in a completely automatic way.

The goal of complete automation of Amut lines for the production of stretch film is also applied in the Rotofeed in-line reprocessing system.

Rotofeed unit is designed to reprocess automatically without any intervention by the operator on the supervisor all the trims made during extrusion process.

The Rotofeed system loads the fluffy material at the mouth of the extruder with constant pressure to achieve the required density and eliminates the presence of oxygen, which creates process problems.

With just 5kw extra installed power, the Rotofeed guarantees the in line reprocess of trims.

No manual adjustments are required for different: thicknesses, film widths, production speeds or resin types and the unit adjusts itself according to its own production algorithm.

During production, the Rotofeed system guarantees a constant pressure at the extruder outlet, in the range of ± 1.5 bar.

In order to avoid any external need of trim reprocessing during the start up or slow down procedure, Amut has designed a unique system called Zero Scrap, which allows automatic recovery without the use of any external bag to collect the fluff.

The Zero Scrap system can be optionally equipped with the second mill that will reprocess all the waste rolls produced during the start-up and slow-down procedure, unwinding them and inserting them directly into the extrusion process without any need of external recycling equipment.