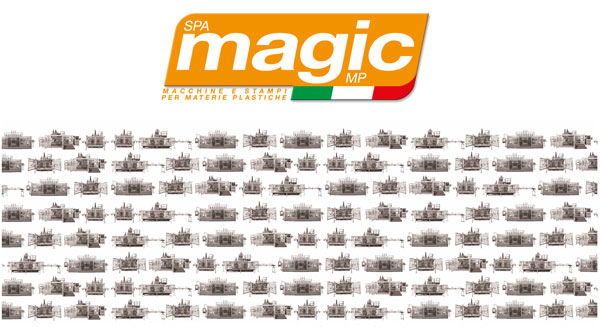 Compared to a hydraulic system, the new Magic system with electrically driven accumulator head generates an average energy saving of 60%. In addition, Magic can define its mechatronic system as ‘power on demand’, i.e. it uses energy only as much as is needed, with obvious advantages in terms of energy consumption, but also major benefits in terms of repeatability of working cycles and long life.

The system Magic has adopted has an efficiency of approximately 95%. This efficiency remains consistent at any load and speed. Magic has adopted a motor torque capable of developing, under the heaviest conditions, a combined power of 28 kW, generating, where requested, a pressure in the accumulation chamber of approximately 200 bar at a movement speed of 90 mm per second.

Finally, we must consider the following: most productions only utilise part of the system’s power, generally between 30% and 60%. Energy cost is automatically reduced in the mechatronic system, while the hydraulic system always compresses the oil to its nominal value. As a result, the further the system operates away from its maximum potential, the more energy is saved by the new mechatronic system.

Other advantages of the mechatronic system:

– Increased safety, oil free machine: Magic mechatronic system has no oil under pressure. This means the non-existence of the risk of breakage of the pressurised system components, and therefore also the absence of related safety systems. Thermoplastics processing machines have heating elements that heat the extrusion system parts up to 300 degrees. Accidental spillage of pressurised oil from an ‘old’ hydraulic system atomises the oil to such an extent that its contact with the incandescent heating elements can lead to a fire hazard. This is not the case with Magic new patented electrically driven system. Safe and oil-free machines.

– Machine suitable for medical and food industry. Any “old” hydraulic system includes a tank from where oil is drawn by a pump and sent to the circuit. Then the oil returns to the tank to be cooled and filtered. The tank must be sized to contain the variation in oil level within certain limits. Because of the return flows, it must be equipped with air exhaust valves, which are filtered but still cannot 100% retain the sprayed oil, thus some may leak into the environment.

Magic new mechatronic system allows to work without contamination, so it is perfectly suited for the medical and food industry.

Compared to the fast mould change-over modes known up to now, Magic new system will differ from all the others because it will be able to carry out a full change-over in double head with the peculiarity that the following components (which until now have conditioned the total change-over time, meant as fast) will be changed electrically, automatically and not manually.

Here are the 8 points that will make your machines more profitable:

At this point the machine will self-adjust with the points listed above: head centre distance, blowpin centre distance, parison centring, post cooling centring and clamping force setting, if needed. You can then go from 240 mm to 280 mm centre distance with completely different bottles.

For what concerns dummy moulds and deflashing adjustments, these will be managed by state-of-the-art manual systems that will also speed up format changeover.

So, at this point, the new Magic technology has made the machines adjustable in self-learning, a technology called SAM (Self Adjustment Machine).

It is estimated that with the new Magic systems, changing from a 10-litre bottle with handle to a 5-litre F-Style bottle, including blowpin centre-distance, deflashing and the various equipment needed to complete the format change, will only take 45 minutes.

PPI: A leap into successful technology