ORP Stampi has developed into one of the major Italian manufacturers in the Rubber Valley district, the study, construction, realization of moulds pertinent to the elastomer part processing.

Constant expansion is currently underway in Plant 1 (HQ in Viadanica), with its second production plant active since 2018, and slowly but surely increase also of its already 70 employees.

Such ‘great steps’ also force to think in ‘big’, and undertake big challenges, especially for a company that caters for only moulds, is forced to face/confront a huge organization, careful organization along with planning pertinent to procurement, raw materials, components, mechanical and electrical accessories.

Over fifty large machines generate considerable consumption on a daily basis. For years ORP Stampi has been energy producer with the photovoltaic system, where it is able to guarantee good amounts of savings and in the short term, the heat emanating from its machinery will be channelled, and will self-heat its work environments. Reducing consumption means reduce energy costs, a precious asset, which must be treated as such.

When we talk about moulds in ORP Stampi, it is now customary to include in addition to the raw material or steel, also various equipment for automation, mechanics, cooling / heating and injection systems of all kinds. Precisely for all these elements of daily consume, the theme of renewal in the transformation of elastomers in the district can give great support to the community. Support that should arise autonomously within each company without waiting for legislative or local impositions.

When ‘called into question’, ORP Stampi morally and technically tries to abide in the best possible way, to reduce and where possible eliminate unnecessary waste. 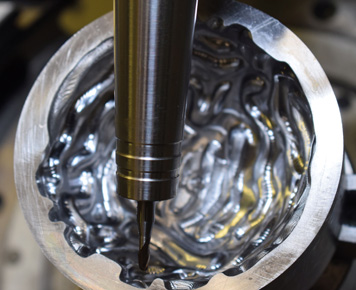 Technically it means: usage of the best seals, thus eliminating those steels and components, perhaps more comfortable and easier to work with, but “secondary” which over time are less durable

Stable moulding solutions, Cold Channels designed to last over time with different compounds and not an end in themselves and to a single project.

Mould design: that aims at the precision of a moulded article and also at the life span of the mould, the mould design must always be balanced and never to its limit.

Last but not least, is the study of heat dispersion in the plates, often the moulded technical articles need a thermal stability and a maximum difference of 1-2°C, stable throughout the moulding cycle.

The choice of steel, combined with the innovative systems ORP Stampi technology applied to the individual plates, are able to guarantee correct homogeneity for its the moulds and overall satisfaction towards its customers.

Year 2022, for many considered “the year of the restart”, for OR.P. Stampi a year of in-depth studies and important collaborations such as the one started with the Politecnico di Milano and Circular Economy, the feasibility study of the TERMO-RENT project.

A rental formula for moulding equipment such as a Cold Runner Block. An economic effort for ORP Stampi that will offer a great return to customers and maybe a little break also to the environment around us.

At ORP Stampi the study and research in recent years has seen the involvement of overseas suppliers and collaborators as well as its internal R&D dept. From these, advantageous results have also emerged in terms of compound savings and reduction of friction from the part, once installed in its final application. It is no coincidence that several seal users, through its customers, approached ORP Stampi to talk about MOULDTEX.

The reduction of friction in dynamic seals will be essential, having tested it and simulated hundreds of compound for different solutions and applications. ORP Stampi’s customers, the ones who are already looking in that forward thinking direction, in the next five years, feel ready to respond to the new needs of the market and will make a difference before others. ORP Stampi, like them, and together with them, knows how important it is to be first.

The latest GREEN innovation / initiative that ORP will present to its customers, will be generated, designed and developed exclusively for their productions. ORP Stampi knows only too well how much the cost of energy is now a primary cost. Hence for such reason, ORP is engaging with important studies in thermodynamics centres to create a moulding solution that will revolutionize its/their sector in terms of energy consumption and production capacity.